Visit to Narahamachi Town Office and Radiation Monitoring in the Area

On March 25, acting Chief Director Nobuhiro Shiotani and Auditor Tsuyoshi Iemori visited the Narahamachi town office (in Iwaki city) and talked to the Section Manager Aoki and the Assistant Manager Matsumoto in charge of the Radiation Measures Section.

As a result of the negotiation, it was decided to visit the Narahamachi town office again on May 10 and to talk directly with the town mayor Mr. Matsumoto on the memorandum.

Details of the negotiation will be reported in the next issue of the SVCF Bulletin.

After the visit to the town office, we left for Narahamachi to conduct a radiation level monitoring in a house (near J-Village) of the resident who applied the monitoring request.

An SVCF member Mr. Masaru Ito who lives in Iwaki City joined in a 3-member monitoring team together with Mr. Siotani and Mr. Iemori

Water and sewage services are not restored yet in this area and those who come back home temporarily for house cleanings bring water in polyethylene tanks.

Everybody looks laboriously preparing for their homing.

The next day, Auditor Iemori inspected the route to Kawauchimura from Iwaki city via Tomiokamachi.

Driving up north in the national route 6, we reach the gate to the zone of inability to return area and off limits there.  No further advance

From this inspection, we found another route to Kawauchimura without passing through the zone of inability to return area.

We will take this route hence for our activities in Kawauchimura.

On his way back, Mr. Iemori inspected the route to enter Kawauchimura from Tomioka Town that was allowed passable recently.

When we measured a surface level at a roadside along the road 6 in Tomiokacho, it showed a fairy high dose of 20µSv/h. 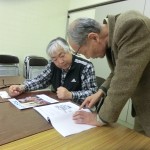 SVCF continued petition signature activities for the clean up of the Fukushima First Nuclear Power Plant since last October until this March.

To our surprise, the signatures amounted to 3,620, and we could receive signees’ heartfelt wishes from everywhere of the whole country.

On April 8, four members, acting Chief Director Nobuhiro Shiotani, Vice-Chairman Kazuko Sasaki, Director Yukio Ito, and SVCF member Tatsushi Okamoto visited the office of Democratic Party Councillor Eri Tokunaga and handed over the petition signature book and asked her of the presentation to the President of the House of Councillors Kenji Hirata.

Regarding the clean up of Fukushima First Nuclear Power Plant, we came to hear voices of the necessity and adoption of a national project even from some ruling party members of the Liberal Democratic Party.

We expect that the petition signatures will influence positively the discussion in related Diet Committees in the future.

Once again, we thank all of you who cooperated from every place of the whole country, and ask your continuous support to realize our wish.

A Request to the TEPCO Nuclear Power Reform Oversight Committee

The purpose of this document was to ask that TEPCO accept our demands to allow the Task Force to inspect the Fukushima Number 1 Nuclear Power Plant, in order for the Task Force to review the openness and transparency of the TEPCO organization.

On April 9th, we received a response from the Oversight Committee, denying the Task Force’s request. They gave two reasons for this denial.

The first reason they gave, was that dismantling the power plant must be done in an orderly manner to ensure that it is done safely. The second reason given, was that selecting the business that will be undertaking the decommissioning project did not fall under the purview of the Oversight Committee.

As you can see, the response that we received doesn’t touch upon the openness or transparency of the organization at all, nor on our most fundamental inquiry, merely stating that “TEPCO refused to accept our request.”

From this viewpoint, we believe that trying to determine how to interpret their first reasoning, “that dismantling the power plant must be done in an orderly manner,” will be an important part of determining the Task Force’s future course of action.

The “Tokai Group” Meeting Has Convened

At this meeting, Mr. Takayasu Sugiyama explained the current situation faced by the Fukushima SVC, and then a DVD was shown, titled “A Message from a Senior Citizen: Sentiments of an Elderly SVC Task Force Member,” which was a special program put together by Fukushima Chuo Television.

Many participants spoke up during this meeting. “We have to put together a team so that we can practice dismantling the power plant, or else we will be useless when the time comes,” “I don’t really understand too much about radiation,” “I am involved in evacuating kids from areas with high levels of radiation,” “I was involved in manufacturing the iron that was used for the Fukushima power plant. I want to see what’s happened to it,” “Why don’t they understand the caliber of people we have on the Task Force,” were some of the comments that we heard most often.

Nuclear Reactors and the cooling pool for spent fuel rods

TEPCO: Nuclear Reactors and the cooling pool for spent fuel rods are being cooled stably. Check the safety for moving spent fuel rods in a dry cask in order to secure the necessary volume in the shared pool

SVCF: TEPCO does not mention any trouble for the power supply to the spent fuel pool.

SVCF: Possibly, a total review and significant alteration to the storage strategy due to the leakage in the underground reservoir occurred in April. TEPCO will voice loud an appeal to drain ALPS processed water off the plant.

TEPCO: Probing leaked points in the containment vessels by a remote-controlled robot.  Under development for several means and operations on the clean-up mechanism in the nuclear reactor building.

SVCF: These seem to be active in the R & D, however, nothing is mentioned in the TEPCO Homepage.

TEPCO: At work, moving scattered debris in the center of the premises and easing external radiations by shielding measures.

SVCF: It becomes doubtful to bring the present radiation dose rate down to 1 milli Sievert per year which is a precondition for the evacuees homing.