The No-entry status of thetownshipofNaraha Machiwas lifted on August 10, and the area is now reclassified, given the status of “Area of preparation for evacuation”. Residents are allowed to enter the area at will, although overnight stays are still banned. The town government is aiming to return in 2014, and it is anticipated that the demand for cleanup, decontamination and radiation measuring in housings will increase.

In this meeting, vice president Shiotani explained and discussed radiation measuring, cleanup and decontamination in housings. The town government asked to be allowed to observe the work, when it starts in Kawauchi village. 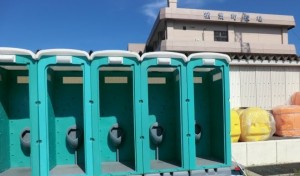 Temporary lavatories were placed in Naraha Machi town office because the water supply for flushing is not operational.

Radiation dosimeters for lending were offered by the town government.