Petition Submitted to the Business and Industry Advisory Committee, House of Councillors

On May 1, the “Petition for Legislation toward the National Project to Decommission the Fukushima Daiichi Nuclear Power Plant” was accepted in the House of Councillors and referred to the Business and Industry Advisory Committee on May 10.

The Committee will examine the intent and determine whether they should adopt it or not.  For details, please visit here

On April 24, several SVCF members monitored the radiation level for two houses inside and out upon a request from several nuclear accident victims in Kawauchimura, as a part of the supportive project for the Kawauchimura homing campaign.

A four member ad-hoc team: leader Kunio Ito from Tokyo, Sugisawa from Morioka, Sekine from Koriyama and Kurokawa from Osaka, was organized for this activity.

Decontamination by the village office had been executed in both areas; however, there was a considerable difference in the aerial dose rate between the two areas.

The village office plans a second round of decontamination, so our compiled data may be significant in the relatively high contaminated areas.

The weather forecast of that day was cloudy with an occasional rain. Outdoor measurement work in the rain was to some extent difficult, for instance because of low visibility due to the rain drops on the instrument cover, and the recording paper getting wet.

This experience will be beneficial for our future work procedure.

SVCF plans to do monitoring after July in houses for the victims of Narahamachi town, as support for the people returning to the town. 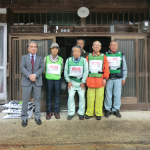 On May 10, acting Chief Director Nobuhiro Shiotani and Auditor Tsuyoshi Iemori visited the Narahamachi town office (in Iwaki city) and had a talk with Mayor Yukihide Matsumoto.

As informed in SVCF Bulletin No. 35, issued on April 26, the purpose of the talk this time was a preparatory negotiation on the exchange of “memoranda” for the monitoring activities inside a number of residential buildings in Narahamachi.

Mayor Matsumoto replied “We take a positive stance for the exchange of memoranda”.

Both parties confirmed to start preparatory work soon for the memorandum exchange, scheduled sometime in July.

Mr. Aoki, section manager of the radiation measures section of the town, also attended the meeting.

The monitoring team has played a key role in the creation of new web pages for the purpose of introducing books and material related to the Fukushima Daiichi Nuclear Power Plant accident,.

Since the accident of the Fukushima Daiichi Nuclear Power Plant of March 11, 2011, we are compelled to live with unavoidable radiation.

These pages, issued as part of SVCF activities, are a collection of educational books, PDF articles and other useful material explaining about a nuclear power plant accident, radiation, and radioactive substances.

On a particular page, the degree of difficulty of the description and contents level are rated, for certain criteria.

The rating is based on personal viewpoints of the respective writers, and may only serve on a limited basis, though it may be helpful as a guidepost for utilizing the materials for educational purposes.

Volunteers from Kansai Involved in Decontamination Efforts in Fukushima City

Fifteen SVC members residing in Kansai have created the group “The Parfait Club – Getting Back on our Feet.” Mr. Shizuo Saeki has written the below statement about their work.

The fact that Kansai volunteers live so far away from the security zone has been a huge disadvantage. Every time we have group meetings in Kansai, people always ask, “When are we going to be able to start working? Instead of the Fukushima Skilled Veterans Corps, we’ve become the group with nothing to do.”

We were anxious to start working, so Mr. Murooka found a project for us – to aid with the decontamination efforts that have been started in Fukushima-shi. The Sotoshu Joenji temple is in the center of this work. They provide free accommodation and the meals are basically free, but a 1,000 yen donation to cover lunch and dinner is appreciated. There are some restrictions that must be followed, such as the number of days you stay, and the number of people you can bring with you.

We purchased volunteer insurance, and submitted our application to the temple. We conducted two separate expeditions, the first on April 19th and 20th, and the second on May 3rd through 5th. Eight members were on the first expedition, and five on the second. Armed with rain boots, raincoats, safety shoes, parkas and facemasks, the driving group leftOsaka and arrived inNiigata at6 am. In the group that went by bullet train, there was one individual who had spent the night inTokyo.

There was a meeting at the temple at 8 amon April 19th. Thirty participants were there, mostly from the Kanto area. Our job that day was to get radiation measurements in Honcho, Wasecho, Kamicho, Daicho, and Aracho city centers, where the prefectural and city government are based. There were 15 groups, each consisting of two members. Each group carried two dosimeters with them, and took measurements along sidewalks, next to roadside trees and street gutters, and near shrubs. If the readings were above 3μSv/h, an alarm went off, and the location was marked on a map. We took measurements at a rate of 20 spots per 100 meters, which made for aching lower backs and lots of hard work.

On average, most of the locations measure 1-5μSv/h, but below roadside trees and near drainpipes, we recorded readings of as much as 10-20 μSv/h. Even in an area that was 60-70 km away from the Fukushima Number 1 Power Plant, the radiation traveled above the mountains and settled onto the nearby trees, according to locals.

In response to these volunteer efforts, the locals used to say, “This gets in the way of our business, so please stop doing it in front of our store.” Now, they’re showing a lot more interest, and when they see the volunteers taking measurements, they ask, “How are the readings?” They are very knowledgeable about the dosimeters as well. In Kansai, most people don’t even know the difference between yearly accumulation levels and the measured values.

On the following day, the 20th, the volunteers divided into two groups, the decontaminating group and the measuring group. The decontaminating group went to places like Wasecho, where, the day before, zeolite had been spread in areas with high readings. The group removed the soil and weeds from these areas. Additionally, this group removed the sand surrounding manholes with a wire brush. Screwdrivers were used to remove the sand in smaller areas. This lowered the readings from 5 μSv/h to 0.5 μSv/h. We did this repeatedly.

This was hard work!

After doing this for approximately 7 hours, we moved the dirt, which was placed in plastic bags, to an area behind the Joenji temple, where drums were placed to store the contaminated soil. The dosimeters showed the readings to be 10 μSv/h. There were approximately 850 drums there. Since the temple started this volunteer project a year and 8 months ago, this was what had accumulated. Because these drums are on the temple’s property, nobody can complain about the work they do. If the government had done something like this, nearby residents would surely have complained. This description may give you an idea of the hardships that go along with decontaminating an area polluted by radiation.

We felt a sense of accomplishment, as this was the first project that the Kansai members were able to take part in, for the victims of the Fukushimadisaster. However, nobody believes that this was it. If anything, everybody came back understanding the limitations of body and mind. This time around, the group participated as “The Parfait Club – getting back on your feet,” but in reality, it should have been a project that was undertaken by the Fukushima SVC. We are still undecided about what project to undertake next. We hope to decide on future objectives at the evaluation meeting on May 19th. 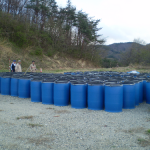 Nuclear Reactors and the cooling pools for spent fuel rods

TEPCO: Nuclear Reactors No. 1 to 3 and the cooling pools No.1 to 4 for spent fuel rods are being cooled in a stable manner.  A construction of the cover (spent fuel rods removing equipment) for the reactor No. 4 is seen to be proceeding smoothly.

SVCF: Cooling remains dynamically stable.  A set of leak prevention and cleanup for the precondition of a cooling circulation in the reactor building is not provided yet. A bedding for a cantilever crane has been completed.

TEPCO: A leak was detected in the underground storage of 5.8 million tons.  The origin of the leak has not been located but the entire volume is to be transferred to the ground level tanks.  The ground level tanks are mostly filled to capacity.  TEPCO had decided to start the volume expansion earlier and to select a suitable place for the temporary reservoir. ALPSand underwater bypassing facilities have started operations.

SVCF: Stopgap remedies may fail in a multi-faceted operation.  Calm decision-making requires estimating a balance between advantages and risks.

Removal of fuel debris and preparation for disassembling

TEPCO: A remote measurement system for radiation and obstacles scattered in the torus room at the operation floor in the reactor No. 2 was provided earlier.  A process of information gathering toward the reactor disassembly and the necessary R & D plan are in the deliberation stage before implementation.

SVCF: It is assumed that the remote measurement system, working under high radiation conditions, requires a preceding evaluation for adoptable methods of cleanup and obstacle removal, before the actual works are carried out in the reactor.

TEPCO: Groping for the development to store secondly contaminated water securely, and for the crystallization on bunching and volume reduction for radioactive waste in the premises.  Research and arrangement for employment relationship is carried out by means of a questionnaire, toward lawful and optimum labor force safety

SVCF: Having a sense of crisis in securing lawful and optimum labor force